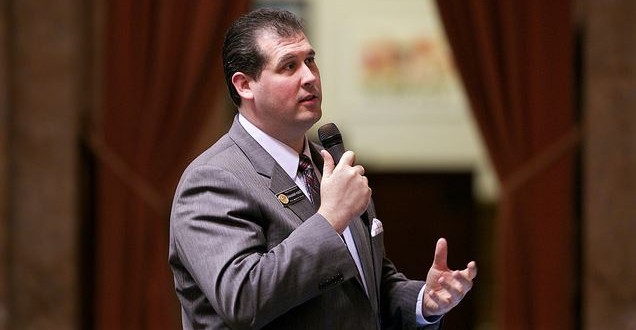 Washington state GOP Rep. Graham Hunt has been pushing a bill that would allow businesses to restrict restroom use to people whose “genitalia match the sign on the door” – as one right wing site put it. Last night he resigned under “stolen valor” accusations. The Seattle Times reports:

State Rep. Graham Hunt has resigned over accusations he exaggerated his military record and lied about serving in the Marines and being wounded in combat. In a statement posted Tuesday evening to his campaign website, Hunt, R-Orting, said “with a heavy heart” he was stepping down immediately, citing “substantial media attention” devoted to “inconsistencies in the records of my military service.” The resignation came after Hunt met with Republican leaders Tuesday afternoon amid mounting allegations against him.

The Seattle Times first reported last month that military records did not back up Hunt’s claims of serving as a “combat veteran” in Iraq and Afghanistan, and that he’d listed three medals on his official biography that the Air Reserve Personnel Center had no record of him receiving. The Times also reported on a doctored photo posted on Hunt’s Facebook page in 2014 that falsely claimed to depict Hunt after a mortar attack in 2005. “I surely have not forgotten that moment,” the post written in Hunt’s name said. In fact, the photo showed two U.S. soldiers in Iraq in 2003. Hunt has blamed the Facebook post on a campaign volunteer he has refused to name.