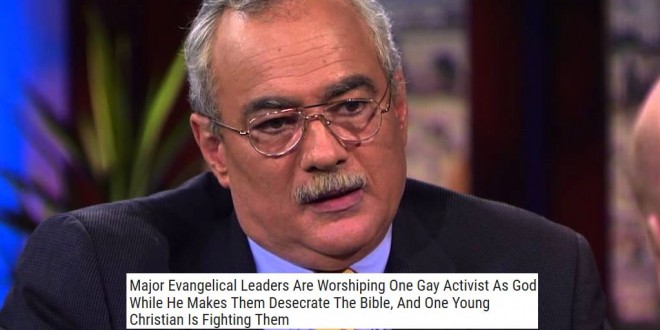 Last week I reported that Christian activist Ted Shoebat has agreed to debate fellow anti-LGBT activist Michael Brown over whether Jesus would stone homosexuals to death. On Friday night Shoebat’s father, an allegedly fake former Palestinian terrorist, accused “sodomite blasphemer” me of tricking Brown, Peter LaBarbera, and other anti-gay nutjobs into calling me their lord and personal savior. Because of my Twitter handle. Seriously.

Take it away Kyle Mantyla at Right Wing Watch:

Shoebat was featured in Janet Porter’s “Light Wins” film last year, along with a variety of anti-gay activists and several Republican presidential hopefuls and members of Congress. Once we began to post clips of Shoebat openly calling for a global Inquisition that would put all gays to death, LaBarbera reportedly sought to have Shoebat removed from Porter’s film, which eventually led to Shoebat attacking LaBarbera as a “filthy pig” and a “traitor.”

The fighting has only escalated in the wake of Shoebat’s recent assertion that Jesus would have personally beaten gays to death, which was denounced by LaBarbera, as well as by fellow anti-gay activist Michael Brown.

This did not sit well with Shoebat’s father, Walid, a supposed “ex-terrorist” who posted a furious screed on his website attacking LaBarbera, Brown, Matt Barber and anyone else who has dared to criticize his son’s extremist views, accusing them of worshiping gay blogger Joe Jervis of Joe.My.God instead of the one true God.

Who controls these leaders? One major gay activist who wraps Evangelical scholars around his finger gives himself the blasphemous title as “Joe My God,” so that when they twitter him they would blaspheme calling him “My God” instead of Christ.

The trick stems from when Caesar wanted the Christian world to address him as kyrios (My lord) which St. Paul denounced by stating “that every tongue should confess that Jesus Christ is Lord” (Philippians 2:11), that is that Christ is Kyrios not Caesar.

But now, this sodomite blasphemer, Joe, has become their god instead. To please Joe the Blasphemer they go as far as lining up to denounce the young Shoebat for calling for the death penalty to even twisting arms to scrub and edit out Theodore’s contribution in an anti-gay documentary.

This bit appear to be from Ted Shoebat:

Peter LaBarbera was blocked from entering Canada, and he goes before the media showing how persecuted he is, but yet he wants to block me — a Christian — from being in a documentary for being more politically incorrect than him. And at the same time, he kisses the feet of the sodomite to deny me as Peter denied Christ.

A filthy sodomite who calls himself “Joe My God”, began to attack LaBarbera for being in the documentary with me. Peter LaBarbera quickly went on Twitter to appease the sodomite, even going to far as to address him with the blasphemous title of “Joe My God”.

Peter LaBarbera wants to do an inquisition saying “We need to look at the exact comments” and “We need transcripts of the exact comments and then he [Theodore Shoebat] needs to disavow that approach”, while at the same time he runs to some sodomite to get his approval. What an absolutely pathetic person. Peter LaBarbera does not want to respect God, but rather “Joe My God”.

The Shoebats go on to claim that Jesus Christ himself smited/smoted/murdered the people of Sodom. Even with my blessedly (heh) minimal knowledge of the bible, that seems rather impossible. Their post also hilariously and unknowingly includes a screencap of a tweet from one of Peter LaBarbera’s troll imposters. And then there’s Walid Shoebat’s claim that his son only wants to execute gay rapists and gay child molesters. As we know from the dozen or more videos posted here, Ted Shoebat has called for the executions of all homosexuals, Muslims, atheists, and even Christians who support LGBT rights.

RELATED: When the article went up on Friday night, I closed the comments on the JMG post that they had linked.