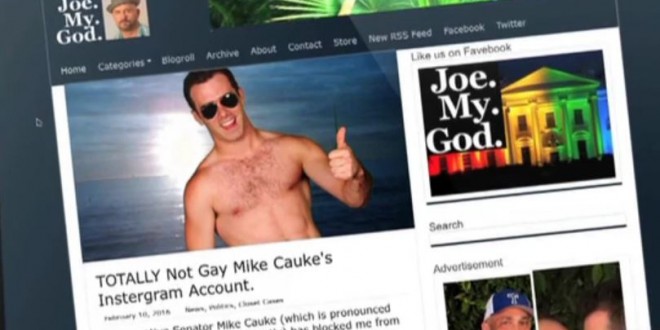 Yesterday Titan Media announced that it will pay $1M to disgraced former GOP Rep. Aaron Schock if he agrees to perform in one of their “hardcore” films. The stunt was timed as a lead-up to their coming take on the Schock scandal, Cauke For President. As you can see, this here website thingy plays the vehicle in which Sen. Mike Cauke is outed. From the trailer’s synopsis:

In these trying times, we need a real man with true family values to lead this nation. One that can make America gay… err, great again. Luckily there’s a brand new candidate that trumps all of the others and has all the big poles rising… unless a torrid sex scandal makes him go down. It’s your chance to show America you want Cauke for President!

The Senator uses Manhunt.net to find a hot hook-up in the form of hunky Nick Prescott, who secretly records their sex romp to expose the Senator. The Senator’s loyal staff does everything they can to protect the him from the release of the sex tape. But in the end the video goes viral on Pornhub.com, ending the campaign and destroying the Senator’s career. Or does it? Will the former Senator finally come out and become an advocate for the gay community that he once voted against? Will he have a Governor McGreevey moment and declare that he is a proud gay American? See Cauke For President!