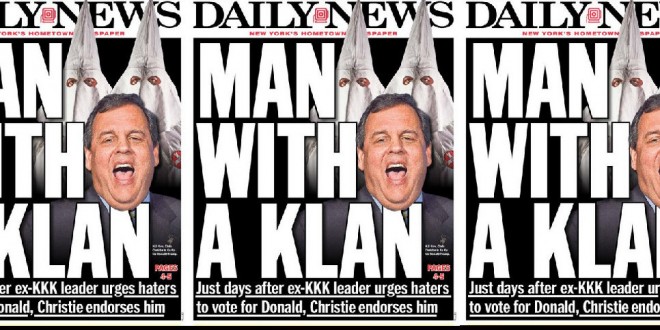 From their accompanying story:

If Donald Trump is good enough for a grand wizard of the Ku Klux Klan, well he’s good enough for the governor of New Jersey. Days after the Klan’s former leader David Duke urged his followers to back the real estate mogul, Chris Christie jumped on the hate wagon. In doing so Friday, Christie ate many of his campaign-trail words aimed at the loudmouth GOP front-runner.

Christie said he made his decision to endorse Trump after consulting with his wife and kids. He called the billionaire businessman and offered to travel with him to Texas, Christie said. “(He) is the person who will go to Washington, D.C., and be able to absolutely turn the place around,” the governor gushed. Trump will also make sure Democratic presidential candidate Hillary Clinton “does not get within 10 miles of the White House,” Christie added.