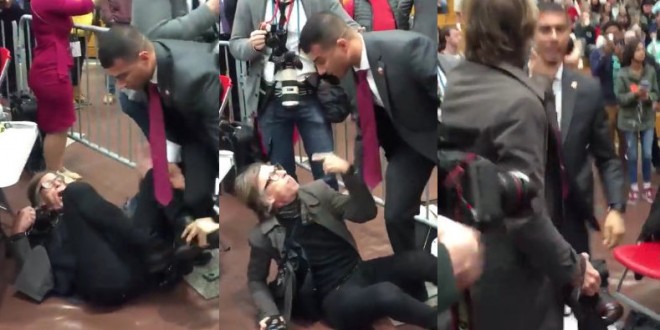 A reporter was allegedly kicked and choked by security Monday afternoon at a rally for presidential candidate Donald Trump in Radford, Virginia. Fellow reporters have identified the manhandled member of the press as Time photographer Chris Morris. Details on what led to the confrontation are scant.

Breitbart is claiming it was the Secret Service agent that was choked by Morris. In the video below, Morris does put his hand on the agent’s neck, apparently to demonstrate what had just been done to him.

UPDATE: There are now conflicting reports on whether the man in the suit was Trump security or Secret Service. I’ll update this post again when more is known. Morris has been arrested.

UPDATE II: CNN is reporting that the incident began when Morris left the media pen in an attempt to follow the protesters as they were being ejected.