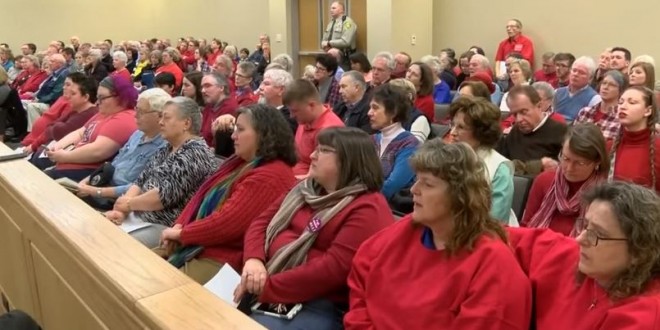 It could not possibly have been more heated than last night’s debate in Charlotte, which was hands down the most wacko I’ve ever seen. And that includes Hawaii. But here’s how things went last night in Tennessee’s Washington County as reported by the Johnson City Press:

Washington County Commissioner Forrest Boreing attributed the early Tuesday morning failure of a resolution against same-sex marriage to the ETSU factor, which he said influenced the vote.

“It was split by (East Tennessee State University),” Boreing said after the 7-hour meeting. “There are so many people from that school that showed up tonight. Most of the colleges do have more liberal attitudes, but that makes for good discussions.”

The 12-11 vote to approve the resolution — failed because supporters needed 13 to capture a majority of the 25-seat County Commission — came nearly 6.5 hours into the meeting, after a nearly hour-long discussion by commissioners on a measure to drop the resolution from the agenda and more than three hours of public comments.

Hundreds packed five courtrooms of the George Jaynes Justice Center and spilled out into upstairs and downstairs foyers, watching the 57 public speakers and the Commission’s debate on projection televisions specially wired for the occasion.

Holding a worn Bible in his outstretched hands, Jonesborough Baptist Church Pastor Randy Robbins quoted scripture that aroused a reaction from those who turned out to oppose the resolution. Lori Starnes, who spoke an hour-and-a-half later, said she was hurt by comments like those made by Robbins.

“I sat out in the hallway waiting for my time to speak across from ministers who told me I should be dead,” Starnes, a gay woman, said. “I was told in the hallway that I was going to burn in hell. It’s amazing to me that they would let you preach that kind of hatred and sow that kind of anger.”

Four other Tennessee counties did approve anti-marriage resolutions in recent weeks. Last month a Tennessee House committee rejected a plan to “nullify” the Supreme Court’s Obergefell ruling. That vote caused anti-gay activists and GOP reps to literally throw themselves to the floor to cry out to White Jesus. Previous AFA Quietly Deletes “Bigotry Map”
Next VIRAL VIDEO: This Is An Ad For Something