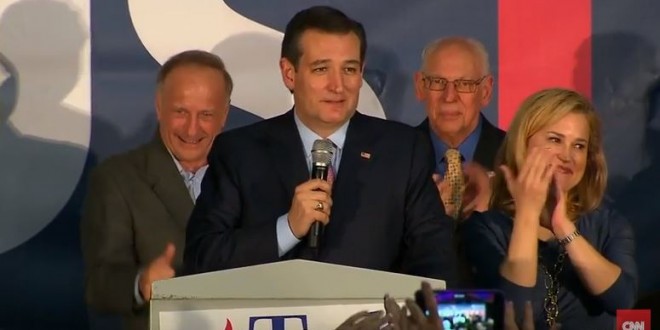 Last night Ted Cruz delivered an insanely long Iowa victory speech that had even his staunchest fans begging for an end on social media. The speech was a deliberate callback to Ronald Reagan and quoted his “morning in America” promise of a conservative era. An excerpt:

While Americans will continue to suffer under a president who has set an agenda who is causing millions to hurt across this country I want to remind you of the promise of scripture. Weeping may endure for a night, but joy cometh in the morning. Iowa has proclaimed to the world, morning is coming. Morning is coming.

From day one this campaign has been a movement. For millions of Americans to organize, to rally, to come together. Whatever Washington says, they cannot keep the people down, and tonight is a testament to the people’s commitments to their yearnings to get back to our core commitments, free market principles.

The Judeo-Christian values that built this great nation. When the Washington lobbyists settled on other lobbyists in this race. When the media in one voice said a conservative cannot win, nationwide over 800,000 contributions poured in to tedcruz.org as courageous conservatives said, yes, we can.

And of course he got in a slam at gay marriage. Even Fox News had cut away from the speech by then.