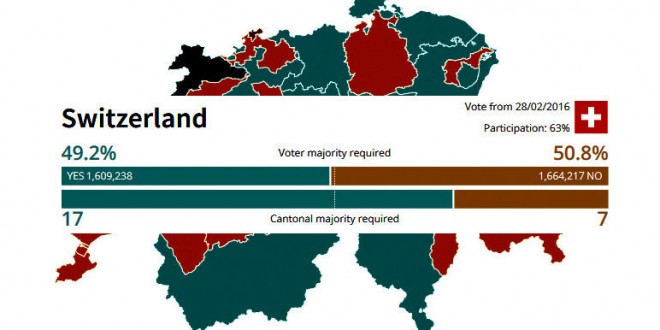 Primarily thanks to residents of Bern and Zurich, today Switzerland’s voters very narrowly rejected a tax bill which contained a “Trojan horse” section which defined marriage as exclusively between a man and a woman. Swiss Info reports:

What had seemed like a sure “Yes” in January became a close contest after an energetic “No” committee argued that the terms of the initiative would pose an obstacle for same-sex couples hoping to tie the knot someday. Final result: 49.2% in favour, and 50.8% against.

Pitched by the centrist Christian Democratic Party, the initiative “For marriage and family – against the marriage penalty” would have reduced the tax burden for married couples, who must file their taxes jointly rather than individually. This can mean a higher tax bill than they would have had as a cohabiting couple without the wedding rings.

See the results by each region here. That the good guys prevailed in today’s close call is being partially credited to a grassroots campaign in which mock gay weddings were conducted on the streets of Zurich. Voter turnout today was the highest seen in Switzerland in more than 20 years. (Tipped by JMG readers Andrea and Luis)

“This initiative was anti-LGBTI sentiment masquerading as tax reform. The Swiss public saw through the proposal and said they didn’t want to be part of it.” commented Joyce Hamilton, Co-Chair of ILGA-Europe’s Executive Board.

The proposed wording would have limited marriage to a union between men and women only, locking same-sex couples out of the institution. LGBTI activists launched a campaign in advance of the vote to point out the contradictory nature of the proposal – simply replacing one form of discrimination with another.

Hamilton continued: “The run-up to this vote was a stressful time for our member organisations and LGBTI activists in Switzerland – it is wonderful to see that their great work has paid off. Their campaign helped voters to understand the issues at stake, illustrated that it wasn’t all about taxes and warned people of the inequality they could be voting for unintentionally”.