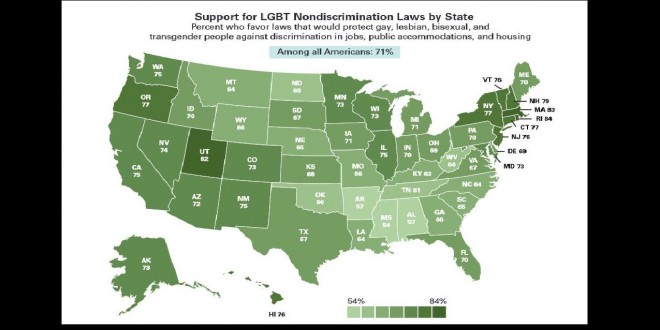 A survey conducted by the nonpartisan Public Religion Research Institute reveals that a majority of Americans in every state supports the Equality Act, which would ban anti-LGBT discrimination in housing, employment, and public accommodations. From the Human Rights Campaign:

Discrimination is a real and persistent problem for too many LGBT Americans. Nearly two-thirds of self-identified LGBT Americans reported experiencing discrimination — including people like Carter Brown, a transgender man who lost his job after he was outed as transgender by his colleagues. Currently, 50 percent of LGBT Americans live in states where they risk being fired, denied housing or refused service because of who they are or whom they love.

The bipartisan Equality Act, establishes explicit, permanent protections against discrimination based on an individual’s sexual orientation or gender identity in matters of employment, housing, access to public places, federal funding, credit, education and jury service. In addition, it would prohibit discrimination on the basis of sex in federal funding and access to public places.

Hit the link for more graphs like the ones below.