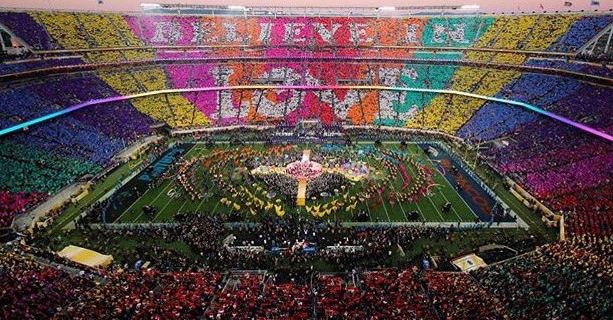 The gay folks who tuned into the Super Bowl to see Beyonce’s halftime performance enjoyed an interesting side perk when Coldplay lead singer Chris Martin got down on his knees to allow a fan to mop his face with a small rainbow flag. Rainbow colors were a major theme at the show as even Martin’s microphone was rainbow-hued.

And then there were the thousands of stadium fans whose cards spelled out “Believe In Love” against a rainbow-colored backdrop and the hundred dancers with rainbow umbrellas.

As of yet there’s no indication that Super Rainbow Bowl 50 was planned as any sort of overtly pro-gay message, but it was certainly interesting. What do you think? Wingnut sites are already buzzing.