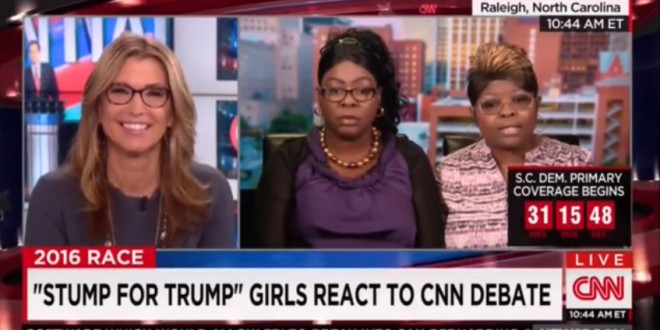 “Stump For Trump” Girls On CNN: Marco Rubio Is Hiding The Gay Lifestyle He Used To Live [VIDEO]

Oh brother. Via The Hill:

Two Donald Trump supporters known online as “Diamond and Silk” on Friday took to cable news to accuse Marco Rubio of having lived a “gay lifestyle” in his past. Rubio told viewers during Thursday’s GOP presidential debate to Google information on Trump hiring illegal immigrants as construction workers for one of his buildings.

“Marco Rubio told us to Google Donald Trump, but I did one better, I Googled him,” Lynette “Diamond” Hardaway told CNN on Friday morning. “And when I Googled him — you know, he owes America and the gay community an apology, because it sounds like that he may have had a gay lifestyle in his past. So you have to be cautious when you tell people to Google people. Stuff will come up.”

The women are mostly referring to Rubio’s story about having met his wife at a South Beach nightclub throwing a foam party. As some of you might know, I lived down there back then and while gay clubs like the Warsaw Ballroom and Amnesia did stage occasional foam parties, a couple of straight nightclubs did as well. In fact, Amnesia’s only regular gay night in those days was on Sundays. Not to mention that being at a South Beach foam party 25 years ago is hardly evidence of being gay, no matter where the party was held.