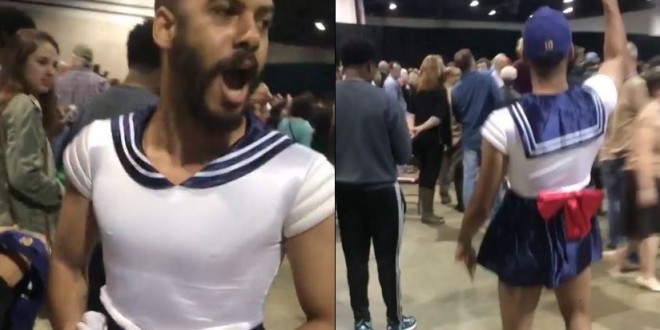 The Donald Trump rally in Atlanta today was weird, well because it was a Donald Trump rally and all of the rules are just tossed out the window all willy nilly. First, Katy Tur of NBC reported on Twitter that, “Trump trashes press. Crowd jeers. Guy by press ‘pen’ looks at us & screams “you’re a bitch!” Other gentleman gives cameras the double bird.” Freedom of Press, Shreedom of Press, amirite? Then a protester cut off the spotlights. So naturally, Awful Records’ Bootymath showed up, stripped off his jeans, only to reveal a Sailor Moon costume, and of course, all of this took place while he chanted,”USA! USA! USA!”

@realDonaldTrump champion of justice @bootymath here ready to fuck up some rallies in the name of the moon #USA pic.twitter.com/bDWzci5vs1