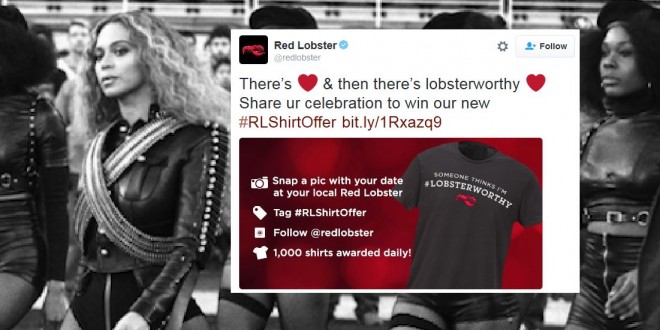 Red Lobster Cashes In On Beyonce

Beyonce’s new single Formation contains this immortal line: “When he fuck me good I take his ass to Red Lobster.” Immediately following her Super Bowl performance of the song – albeit a cleaned up version – the Twitterverse hovered over Red Lobster’s feed, hoping for an amusing or at least meme-worthy reaction. But it was a long eight hours before Red Lobster finally posted a lame suggestion that “Cheddar Bey Biscuits has a nice ring to it.”

Since that Super Bowl name-check, however, business at Red Lobster has soared by a reported 33%. Enter the promotion launched last night:

Just in time for Valentines Day, Red Lobster is finally monopolizing on the singer’s incredibly lucrative name-drop. The company has made T-shirts with a picture of a lobster and emblazoned with the phrase ‘I’m lobsterworthy’ that are being given away at restaurants, if customers take a photo of their date and tweet or Instagram it with the rather unromantic hashtag: #rlshirtoffer. Red Lobster was heavily criticized for failing to respond quickly enough to the singer’s racy connotation. Twitter went into meltdown as hundreds of Beyonce fans flooded the firm’s page with memes and GIFs mocking its ‘late’ and ‘weak’ response. But the company has since stepped up to the mark and is cashing in on what is already its busiest time of year.

Teabagistan is already fuming about the promotion. First out with a boycott call is the website for nutjob former Rep. Allen West, where the headlines routinely redefine the meaning of clickbait. RELATED: Next week a group of wingnuts will protest “racist” Beyonce at NFL headquarters in Manhattan.

ALSO RELATED: You might not be getting actual lobster at Red Lobster.