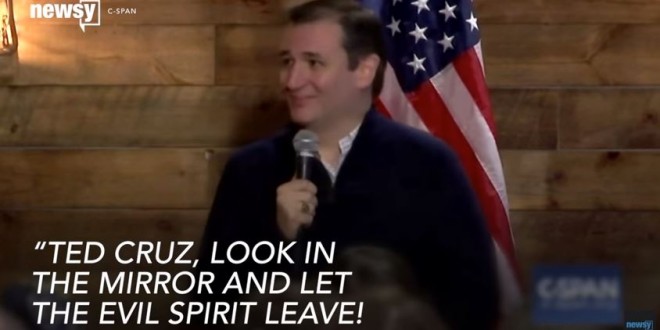 Nobody ever said campaigning for the presidency would be boring. Two men entered a Ted Cruz town hall equipped with mirrors and a wooden cross to, uh, perform an exorcism on the Texas senator on Monday. Seriously. “Ted Cruz look in the mirror and let the evil spirit leave!” one man shouted at the event in New Hampshire. “Leave your power hungry demonic soul! He’s possessed by a demon! The demon has to leave. That’s why the body is so disgusting to look at!”

Cruz blamed the two men trying to perform an exorcism on… the Bernie Sanders campaign? Yup. “Very nice young man,” Cruz said. “A very confused fellow… apparently the Bernie Sanders campaign,” Cruz said, his voice trailing off as the protesters were shoved out the door by a police officer. The two men declined to give their names to reporters, but pretended to vomit while leaving the event.