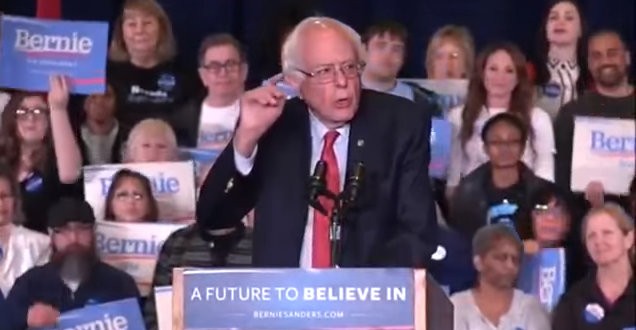 Politico: Tomorrow Could Be “Final Stand” For Sanders

From a lengthy piece posted this morning by Politico:

Bernie Sanders’ campaign is desperately fighting to prove that Super Tuesday isn’t his final stand. The outlook is grim: He likely needs comfortable wins in at least five states to realistically keep pace in the delegate hunt.

Coming off a deflating loss in Nevada and a thorough pummeling in South Carolina, Sanders’ brain trust views March 1 as a swinging gate that could either reveal — or effectively close off — his path to the nomination. It’s a trying moment that his increasingly nervous top aides have been prepared to face for months, just not so soon.

Their best-case Super Tuesday scenario looks like this: Of the 11 states holding Democratic contests, Sanders wins Colorado, Minnesota, Massachusetts, and Oklahoma — four states where he’s invested in television advertising. Then he blows out Clinton in Vermont, and keeps it close in Virginia.

As long as Clinton’s margins of victory in Alabama, Arkansas, Georgia, Tennessee, and Texas – states with sizable African-American populations — aren’t too overwhelming, he could march onto a trio of friendlier contests the following weekend with a credible case to make.

His campaign could argue that Super Tuesday was a split decision, one that would still likely see him trailing Clinton in delegates, but not by an insurmountable margin, thanks to their proportional allocation.