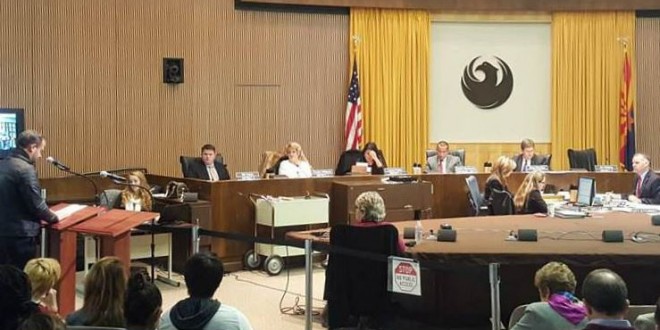 The Satanic Temple, which is actually a group of atheist activists and pranksters, has trolled the Phoenix City Council into ending its practice of opening their meeting with prayers. The Washington Post reports:

For weeks now, Phoenix lawmakers have wrestled with the idea of allowing members of a Satanic group to give the invocation before an upcoming city meeting. Phoenix City Council members arrived Wednesday at a controversial solution: Banning prayer altogether.

From now on, lawmakers decided in a 5-4 vote, council meetings will no longer begin with a traditional prayer, but instead open with a moment of silence. Although the decision may block the Satanic Temple’s Feb. 17 invocation, it prompted outcries from some Phoenix residents and city officials who believe the prayer ban is a de facto victory for the Satanists.

“This is what that Satanist group wants,” Councilman Sal DiCiccio told the Arizona Republic. “A moment of silence is basically a banning of prayer. It’s to agree to the Satanic goal to ban prayer.” In a tweet, DiCiccio called it a “sad day for Phoenix.”

Much more is at the link. (Tipped by JMG reader Homer)