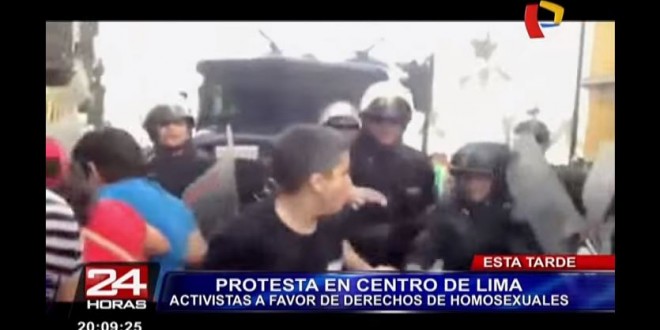 Police in Lima, Peru broke up a peaceful gay kiss protest with water cannons on Saturday (13 February). Dozens of people gathered together to protest against homophobia. They held hands, kissed, embraced and waved rainbow flags.

Sin Eqiguetas, a LGBTI website in Lima, posted pictures that showed same-sex couples kissing as armored police trucks loomed in the background. Police sprayed the activists with water and kerosene from the armored truck, with many being injured.

The Catholic Church is a heavy influence in Peru with opinions on the LGBTI community is considered generally hostile. It was only back in 2002, during the first Lima Pride, most demonstrators wore masks to avoid being persecuted and assaulted.

More video and photos are here.