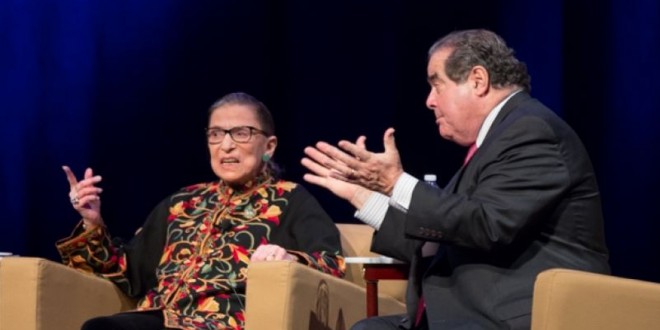 SCOTUSblog has posted reactions to the death of Antonin Scalia from current and former members of the Supreme Court. All are standard statements of regret and praise, save the message from Ruth Bader Ginsburg, who memorializes her best friend this way:

Toward the end of the opera Scalia/Ginsburg, tenor Scalia and soprano Ginsburg sing a duet: “We are different, we are one,” different in our interpretation of written texts, one in our reverence for the Constitution and the institution we serve.

From our years together at the D.C. Circuit, we were best buddies. We disagreed now and then, but when I wrote for the Court and received a Scalia dissent, the opinion ultimately released was notably better than my initial circulation.

Justice Scalia nailed all the weak spots—the “applesauce” and “argle bargle”—and gave me just what I needed to strengthen the majority opinion. He was a jurist of captivating brilliance and wit, with a rare talent to make even the most sober judge laugh. The press referred to his “energetic fervor,” “astringent intellect,” “peppery prose,” “acumen,” and “affability,” all apt descriptions. He was eminently quotable, his pungent opinions so clearly stated that his words never slipped from the reader’s grasp.

Justice Scalia once described as the peak of his days on the bench an evening at the Opera Ball when he joined two Washington National Opera tenors at the piano for a medley of songs. He called it the famous Three Tenors performance. He was, indeed, a magnificent performer. It was my great good fortune to have known him as working colleague and treasured friend.