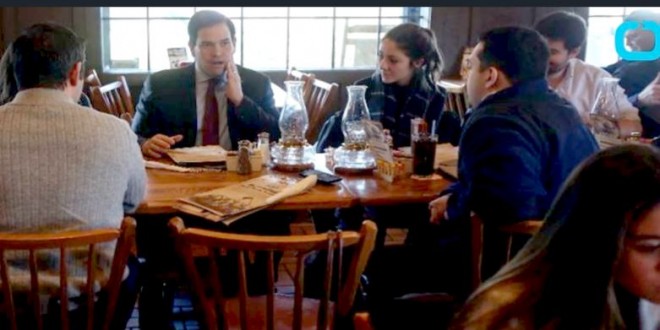 Marco Rubio chipped a tooth while eating a frozen Twix bar, so naturally tonight he issued a money beg declaring that he’s continuing to “fight tooth and nail” and asking his followers to “chip in” to his increasingly beleaguered campaign. Rubio has been told to eat soft foods while his repaired tooth sets and the Twitterverse is snarkily leaping upon this as possible proof that he is not a robot after all. Via USA Today:

“I just bit into a Twix bar and I go, ‘Man this Twix bar’s got something really hard in it,’ ” said Rubio, 44, per the Journal. “And I go, ‘Oh my gosh, I cracked my tooth.’” Rubio’s detractors this week have put forth theories that he is a robot, based on a seemingly programmed performance in last Saturday’s Republican debate. It stands to reason that robots, in general, do not have humanoid teeth. Those that do have such teeth are savage killing machines that desire not food but rather the end of all mankind (and certainly not confections of sweet caramel). Marco Rubio: human after all. Previous CUBA: Pope Francis & Head Of Russian Orthodox Church Issue Joint Denouncement Of Gay Marriage
Next Tony Perkins: If “Godly” Ted Cruz Is Not Elected, There May Never Be Another Election In America [VIDEO]