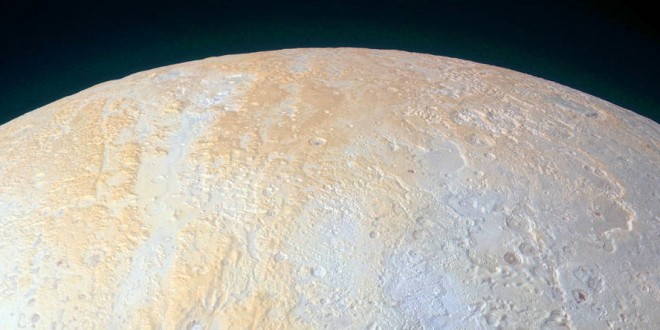 This ethereal scene captured by NASA’s New Horizons spacecraft tells yet another story of Pluto’s diversity of geological and compositional features—this time in an enhanced color image of the north polar area. Long canyons run vertically across the polar area—part of the informally named Lowell Regio, named for Percival Lowell, who founded Lowell Observatory and initiated the search that led to Pluto’s discovery.

The widest of the canyons (yellow in the image below) – is about 45 miles (75 kilometers) wide and runs close to the north pole. Roughly parallel subsidiary canyons to the east and west (in green) are approximately 6 miles (10 kilometers) wide. The degraded walls of these canyons appear to be much older than the more sharply defined canyon systems elsewhere on Pluto, perhaps because the polar canyons are older and made of weaker material. These canyons also appear to represent evidence for an ancient period of tectonics.

A shallow, winding valley (in blue) runs the entire length of the canyon floor. To the east of these canyons, another valley (pink) winds toward the bottom-right corner of the image. The nearby terrain, at bottom right, appears to have been blanketed by material that obscures small-scale topographic features, creating a ‘softened’ appearance for the landscape.