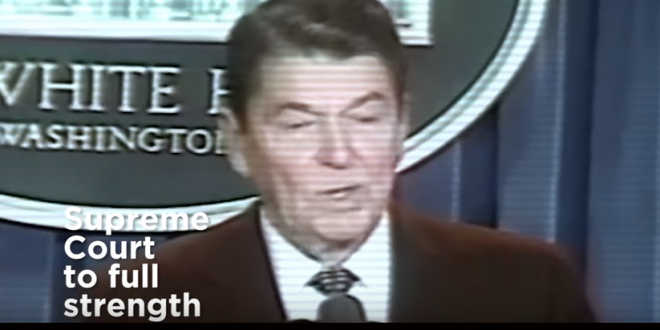 Senate Republicans just announced that they won’t even allow a committee hearing on President Obama’s Supreme Court nominee—and they don’t even care who the nominee is. This is the most blatant partisan obstruction we’ve ever seen. Even Republican Senators Mark Kirk and Susan Collins—and former Republican Supreme Court Justice Sandra Day O’Connor—disagree with it.

In fact, you know who else disagrees? Ronald Reagan, the infallible patron saint of the Republican Party. The video we uncovered of Reagan demanding an election-year vote on his Supreme Court nominee is priceless—and we used it to create a devastating TV ad holding Republicans accountable.

Previous AUSTRALIA: Government Apologizes For Mistreatment Of Gay Activists At Historic 1978 March [VIDEO]
Next Romney: Is A Bombshell In Trump’s Taxes? [VIDEO]