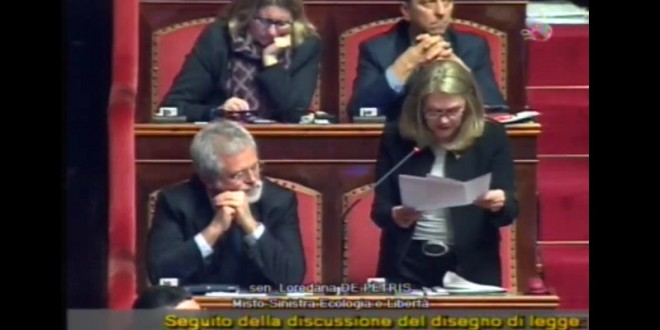 The Italian Senate has begun its hearing on the hotly-contested civil unions bill, which no longer contains a provision for stepchild adoption by same-sex parents. Watch below. Italian speakers, help us out please. If the bill passes in the Senate today, it moves to the House Of Deputies where it’s expected to gain easy approval and then be signed into law by Prime Minister Matteo Renzi.

Today’s vote could have major consequences should it fail. Via Reuters:

The Italian government on Wednesday called a confidence vote over hotly contested legislation on gay civil unions after Prime Minister Matteo Renzi watered down the bill to reach an accord in his ruling coalition.

Italy is the only major Western country that has not yet recognized civil unions for same-sex or heterosexual couples, continuing to withhold from them legal protections such as inheritance rights.

Constitutional Reforms Minister Maria Elena Boschi told the Senate the government was calling a vote of confidence over the amended legislation which strips out all provisions on adoption rights for unmarried gay and heterosexual couples.

The clause giving unmarried couples limited opportunities to adopt their partner’s children was the most fiercely contested aspect of the bill and had been opposed by Renzi’s main coalition partner and many members of his own Democratic Party.