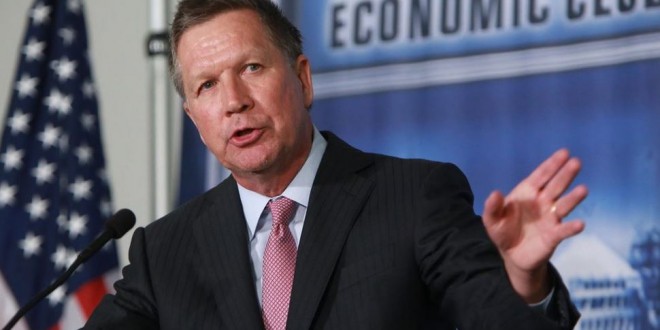 John Kasich: Obergefell Is Settled Law And That’s That

Ohio Gov. John Kasich was confronted today by a gay college student who demanded to know his positions on same-sex marriage and LGBT rights. What followed was interesting:

“If I see discrimination in anything, like I said earlier, I’m willing to do what I can,” Kasich said. “Whether it’s executive order or legislation. That’s fine with me. As for marriage equality – let me be clear I’m for traditional marriage but I’ve been to my first gay wedding. A friend of mine is gay and got married. I went home and said to my wife, we’ve been invited to Steve’s wedding and you know, said this is going to be unusual for us. She said, well I’m going. Are you going? And I went. And I had a great time. And there was great champagne.”

The student pressed back, “I don’t think that’s enough for you to say you’ve been to a gay wedding.” “Well, we’re not changing any laws,” Kasich told him. “We’re not changing. We’re not going to allow discrimination on this.”

“So the Supreme Court upheld marriage equality,” the student noted. “Does that mean you would go out of your way to protect that right?” Kasich ended the conversation. “Look, we’re not changing any laws,” he said. “The court has spoken. That’s the end of it.”