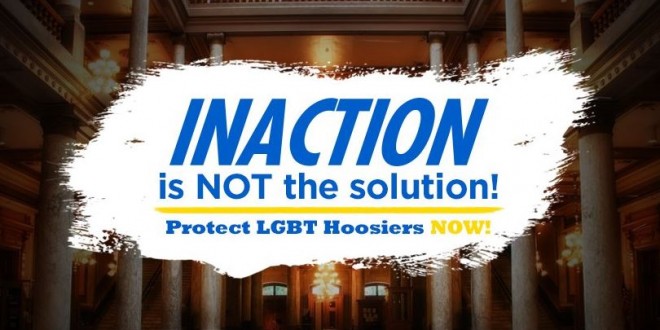 It was hoped that the fake LGB (no T) rights bill that advanced last week in an Indiana Senate committee would be amended and corrected today before the full chamber. Instead it wasn’t heard at all and is now dead for the legislative session. Hate groups are doing a victory dance. From the Indianapolis Star:

Senate President Pro Tem David Long, R-Fort Wayne, pledged to revisit civil rights legislation for LGBT Hoosiers next year. He told reporters that Senate Bill 344, the gay rights proposal, did not have enough support from Republican lawmakers to pass the full Senate this year. Long said there was “no need” to have a debate or vote on the issue.

Apprehensions from House Speaker Brian Bosma and Gov. Mike Pence also factored into the decision to kill the bill, Long said. Long blamed advocates on both sides of the issue for their unwillingness to compromise on extending some protections while also protecting religious beliefs. Still, he said the discussion that happened this year shows Indiana is willing to delve into the debate over rights for lesbian, gay, bisexual and transgender people.

Bill author Travis Holdman, R-Markle, said he was “disappointed” that Indiana was “not ready” to protect gay rights. Senate Minority Leader Tim Lanane, D-Anderson, said Democrats were willing to compromise on transgender rights by providing protections in housing, or housing and employment, while leaving out public accommodations. However, he said Democrats would not have supported Senate Bill 344 in its current form, without any transgender protections.

The Indiana Family Institute and the state AFA chapter celebrated the bill’s demise to the press.

SB 344 will not advance in the Indiana Senate. Although it was previously scheduled for a second hearing today, according to the bill’s author, the legislation will not be considered and will therefore fail to meet the required deadline this year. The deeply flawed legislation was a failed attempt to address the damning evidence that continues to emerge from the destruction caused to Indiana’s economy by Gov. Pence’s discriminatory Religious Freedom Restoration Act (RFRA) last year, but the Senate had every opportunity to amend the bill to provide real protections for LGBT Hoosiers.

“Indiana lawmakers must move forward legislation this session that would truly safeguard LGBT Hoosiers and visitors from discrimination,” said JoDee Winterhof, HRC Senior Vice President for Policy and Political Affairs. “These lawmakers cannot ignore their responsibility to move Indiana beyond the continuing damage they inflicted on the state last year with an anti-LGBT RFRA. Fully inclusive LGBT non-discrimination protections are what the state desperately needs and what LGBT Hoosiers and visitors deserve.”

Thinly veiled as an attempt to allow discrimination against LGBT Hoosiers to continue while trying to mitigate the tremendous economic damage inflicted on the state from Gov. Pence’s Religious Freedom Restoration Act (RFRA), the bill claimed to provide non-discrimination protections but unacceptably left behind transgender Hoosiers, included dangerously broad religious refusal exemptions, undermined existing protections for race and religion, explicitly permitted taxpayer-funded discrimination in adoption agencies, and would have stripped away the authority of local municipalities to pass fully inclusive LGBT non-discrimination protections.

Previous Ted Cruz Prayer Team: Satan Rejoices Every Time One Of Our Emails Doesn’t Go Through [AUDIO]
Next Harlem Hate Pastor: Fags Will Have Babies Through Their Anus Before I Let Them Have My Church [VIDEO]