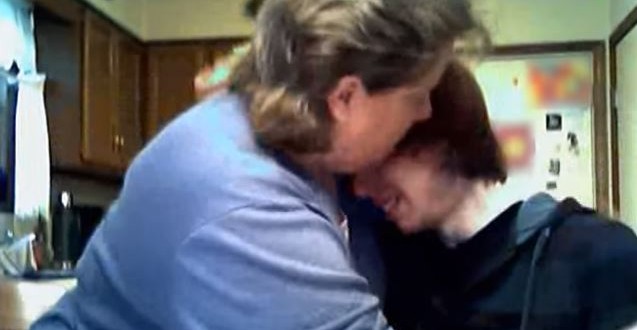 Tissue alert! Nearly two years ago Honey Maid launched a series of pro-LGBT messages, all posted with the hashtag #ThisIsWholesome, which earned them immediate furor and boycott calls from hate groups. Honey Maid continues the theme this week with a “Love Day” Valentine’s clip that includes several heartwarming exchanges between LGBT kids and their families. Pink News recaps:

The new video features a gay kid coming out to his mum, a couple of adopted brothers explaining why they really are brothers, and a trans guy talking with his mum about his transition. When the gay kid comes out, his mum says: “I knew you were, hun… I love you no matter what in the world. Don’t you know that?” Another guy talks about his birth parents, and his adopted, saying he is grateful he was put up for adoption, but also that he’d love to have a relationship with his birth parents. The adoptive brothers say: “A lot of people don’t understand what adoption really is. We have to explain things to people a lot. It’s not hard and confusing for us.” “Yeah. We’re brothers!” they say with an embrace.

PREVIOUSLY ON JMG: One Millions Moms calls for a boycott of Nabisco for “normalizing sin.” The American Decency Association calls for boycotting Nabisco because Honey Maid has proven that Satan loves Graham Crackers. Charisma News declares that Nabisco will by sorry when Jesus returns from the grave. Pastor Kevin “Kill The Gays” Swanson declares that Nabisco clearly also loves axe murderers and cannibals because homosexuals are just as bad.