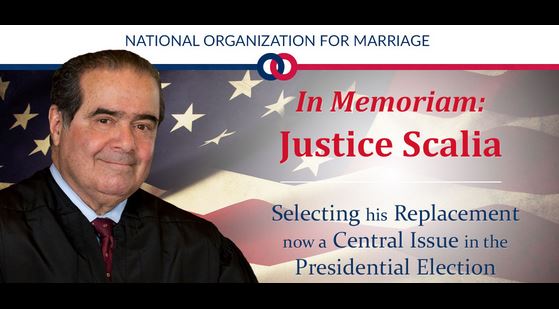 When the majority of his colleagues, led by Justice Anthony Kennedy, ruled in Romer v Evans that the voters of Colorado could not prohibit the granting of special rights to homosexuals, Scalia took them to task for the abject lack of constitutional basis for the ruling.

He reminded the Court that just ten years earlier in Bowers v. Hardwick they had ruled that there was no fundamental constitutional right for someone to engage in homosexual acts and that the constitution had not changed during the intervening decade. Despite this, the liberal Kennedy wing decreed that it is unconstitutional for voters to prevent special rights to be granted to gays and lesbians because doing so supposedly amounted to animus and discrimination, and that expressing moral disapproval of homosexual conduct was akin to racial and religious bigotry.

To this, Justice Scalia chastised the majority for its utter lack of judicial basis: “The Court today… employs a constitutional theory heretofore unknown to frustrate Colorado’s reasonable effort to preserve traditional American moral values…But the Court today has done so, not only by inventing a novel and extravagant constitutional doctrine to take the victory away from traditional forces, but even by verbally disparaging as bigotry adherence to traditional attitudes.”

The constitutional battle over marriage and traditional American values came more clearly into focus in the case of Lawrence v Kansas, which revisited whether states could penalize people for engaging in homosexual conduct such as sodomy (which was at issue in the Bowers case years before). Once again, Justice Anthony Kennedy led the majority to strike down state laws penalizing sodomy, and once again Justice Scalia dissented — not because he personally favored penalties for homosexual conduct but because the US Constitution simply does not contain a fundamental right to homosexuality.

In his dissent in Lawrence, Justice Scalia presciently warned that the ruling would inevitably lead to gay marriage and the striking down of laws against polygamy, bigamy, adult incest and bestiality because the Court was effectively banning states from considering the morality of sexual practices as an intrusion into the personal and private life of the individual.

Previous BRITAIN: BBC To Launch Reboot Of Smash 70s Sitcom Are You Being Served? This Fall
Next Glenn Beck: God Killed Antonin Scalia In Order To Make Sure Ted Cruz Becomes President [VIDEO]