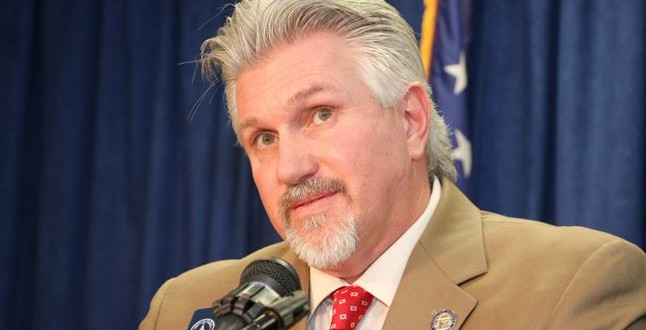 The bill is due to be heard at 11:30AM Eastern. From Georgia Unites:

On Tuesday, the Senate Rules Committee is scheduled to consider, and likely vote on, the so-called First Amendment Defense Act (FADA)—legislation that exists solely to legalize state-sanctioned discrimination against same-sex couples. If we can’t stop FADA before then, the next stop for this shameful bill is a full floor vote in the Senate—one huge step closer to becoming law of the land.

From the text of the bill sponsored by GOP state Sen. Greg Kirk [photo]:

A BILL to be entitled an Act to amend Title 50 of the Official Code of Georgia Annotated, relating to state government, so as to prohibit discriminatory action against a person who believes, speaks, or acts in accordance with a sincerely held religious belief or moral conviction that marriage is or should be recognized as the union of one man and one woman or that sexual relations are properly reserved to such marriage; to provide for definitions; to provide for the granting of relief; to provide for construction and application; to provide for waiver of sovereign immunity under certain circumstances; to provide for a short title; to provide for an effective date; to repeal conflicting laws; and for other purposes.

The Georgia Senate is broadcasting live from the full chamber at this writing, but there doesn’t appear to be a video feed from the committee room. Follow Georgia Unites on Twitter.