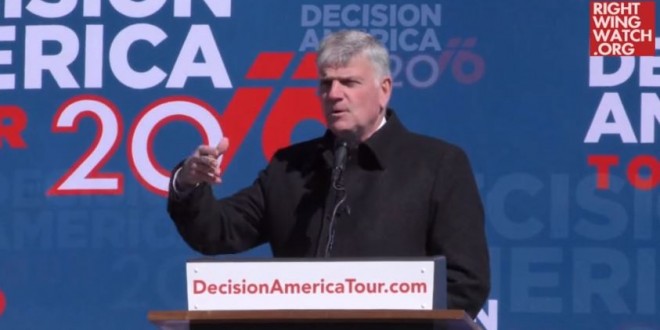 Franklin Graham: Christians Must Take Over Every Mayorship To Stop “Wicked Garbage” Of Gays [VIDEO]

Miranda Blue has the story at Right Wing Watch:

At a stop in Atlanta this week, Graham spoke about the need for conservative Christians to not only vote, but to run for office, saying that if every city in America had a Christian mayor, we wouldn’t have “evil” and “wicked” policies like LGBT nondiscrimination measures.

“Can you imagine the impact if every community and every city across this great land of ours was run by Christian men and women in that office as mayor, the difference that that would make in our cities, if we had Christian mayors?”

Graham brought up Charlotte, North Carolina, where he claimed that “90 percent of Christians” failed to vote, allowing a candidate who is supportive of LGBT rights to be elected. Charlotte’s city council rejected an LGBT nondiscrimination measure last year after opponents fixated on transgender people using the bathroom of their choice, a new flashpoint of anti-LGBT activists.

“And we got a woman and her goal is the gay-lesbian agenda,” Graham said, “trying to get transgenders into the bathrooms so that if a person wakes up in the morning and they feel like they’re a woman that’s a man and he wants to go into a ladies’ restroom then they can do that. And that’s her goal. And I can tell you right now that that’s wicked and that’s evil. Men belong in men’s bathrooms and women belong in women’s bathrooms and we don’t need men and predators going into women’s bathrooms, I’m just telling you.”

“Now, that’s what happens when Christians don’t vote,” he declared. “That’s what we get, this is the kind of garbage we get.”