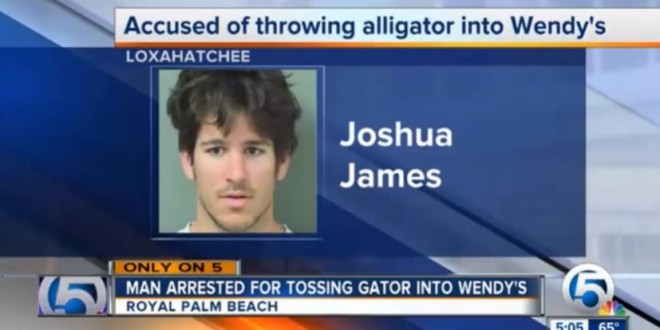 Gator wasn’t on the menu but one did make an appearance inside a Wendy’s just east of Loxahatchee in Royal Palm Beach. And it wasn’t by choice. A Jupiter man threw it through the restaurant’s drive-thru window, according to a Florida Fish and Wildlife Conservation Commission incident report.

FWC officials say 23-year-old Joshua James pulled up for his order and after a server handed over a drink and turned around James reached into the back of his truck and tossed the 3-and-a-half foot gator through the drive-thru window.

The incident report showed a picture of the gator inside the restaurant. James faces charges of aggravated assault and unlawful possession and transportation of an alligator. FWC said James admitted to picking up the gator on the side of Southern Boulevard and bringing it to the fast food restaurant.

This morning James was ordered to undergo a mental evaluation and stay away from all animals except his mother’s dog. The judge also commanded that he keep out of Wendy’s. The gator was released into a local canal where it will once again be free to snack on area pets. (Tipped by JMG reader Phillip)