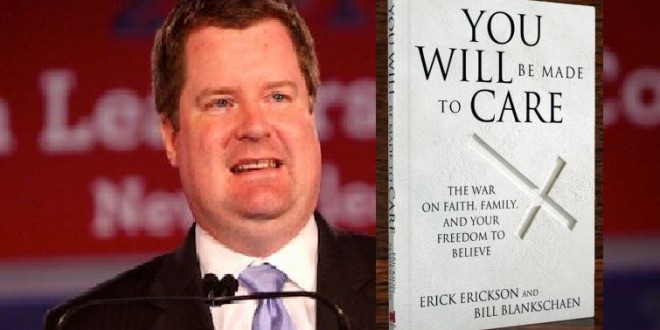 According to the figures provided by the federal government, there are about 20 million Christian-owned businesses in the United States. And as we know only a literal handful have ever been fined (not shut down) for breaking state public accommodation laws by refusing to serve LGBT customers. Those simple facts notwithstanding, according to the meme that has swept Teabagistan in the last year, gays are putting Christian companies out of business right and left all over the country.

Wingnut radio and television blowhard Erick Erickson capitalizes on these ridiculous lies in a coming book, as Media Matters explains:

In his new book set to be released this February, Fox News contributor and prominent conservative media figure Erick Erickson will explain how the “leftist-homosexual mafia” is waging a “war on Christians.”

On February 22, Erickson will release his new book You Will Be Made To Care: The War on Faith, Family And Your Freedom To Believe, co-authored with Christian blogger Bill Blankschaen. The book explores how “religious liberty is under attack in America.”

According to its website, the book will teach readers “how there is nowhere to hide: no matter how small your bed and breakfast, or your wedding chapel, or your flower shop–the leftist-homosexual mafia will shut you down if you don’t share their beliefs.”

In the past, Erickson has referred to the LGBT community as terrorists, suggested that businesses serving gay couples are “aiding and abetting sin,” and predicted that the arrest of Kim Davis could lead to “another civil war.”

The book is already listed at #1 in the Amazon category “Religious Intolerance & Persecution.”