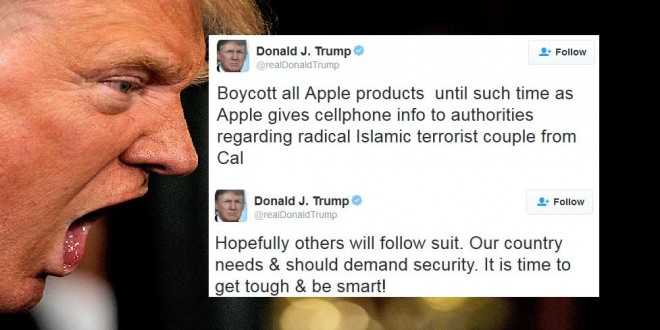 Donald Trump today called for a boycott of Apple until the company hands over proprietary security information which will allow the federal government to hack the iPhone of the San Bernardino terrorist. Earlier this week Apple CEO Tim Cook vowed to fight a court order which commands the company to provide that data to the FBI. Today Apple was granted a three-day extension to the order, giving them until midnight next Friday to comply. It’s unclear what steps the feds might take against Apple if they fail to meet the deadline.

Previous NEVADA: State Democratic Party Threatens To Prosecute Anybody Who Votes In Both Party Caucuses
Next Court Grants Harlem Hate Church Temporary Delay To Foreclosure Auction (And Why This Is A Good Thing)