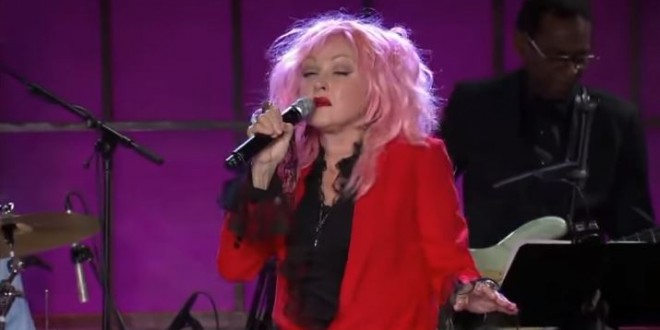 Cyndi Lauper’s star-studded album of country western classics, Detour, is coming and today she’s offering a free download of the first single with pre-orders. From the press materials:

Lauper sounds right at home from the start, beginning with the album opener, “Funnel Of Love,” a track Wanda Jackson, the Queen of Rockabilly, recorded in 1960. Another highlight is the rollicking take on “Heartaches By The Number,” a country standard previously covered by everyone from George Jones to Waylon Jennings to Dwight Yoakum. DETOUR also features stunning covers of two classic Pasty Cline songs, “Walkin’ After Midnight” and her #1 smash, “I Fall To Pieces.” Lauper says, “I spent a lot of time in my room singing with Patsy. I had to sing a Patsy Cline song – or two – because her voice was like one of my girlfriends. That’s how close I felt to her.”

For the album, Lauper duets with several special guests, including country music royalty: Emmylou Harris (on the title track), Willie Nelson (“Night Life,” a song he wrote over 50 years ago), Vince Gill (Loretta Lynn and Conway Twitty’s “You’re The Reason Our Kids Are Ugly”) and Alison Krauss (Dolly Parton’s “Hard Candy Christmas.” Jewel also makes an appearance on DETOUR, showcasing her prodigious yodeling skills on “I Want To Be A Cowboy’s Sweetheart,” which was the first country song by a woman to sell one million copies.

Also on the album is the country standard Misty Blue, which was made most famous in 1976 with Dorothy Moore’s Grammy-nominated R&B take. Speaking of such things, Lauper is now three-quarters of the way to joining the exclusive EGOT club, having wins in the Emmy, Grammy, and Tony categories.

Previous Ted Cruz: With Help From Hate Groups, Obergefell “Will Not Stand” When I’m President [AUDIO]
Next Canadian Island Welcomes US Refugees From Trump