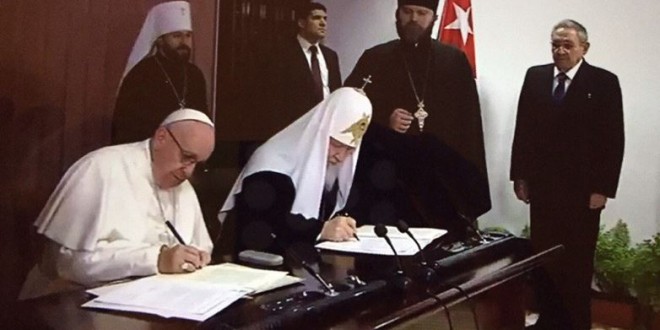 Last month the head of the Russian Orthodox Church declared that young men become terrorists because they are outraged about gay pride parades. Today he is in Cuba with Pope Francis for the first meeting between the heads of their churches in over 1000 years. With ten centuries worth of bickering to discuss, naturally the first thing they did was issue a joint written denouncement of gay marriage.

The New York Times reports on the meeting:

As he approached the Russian patriarch amid the clicking of news cameras, Francis was overheard to say, “Brother.” A moment later, he added, “Finally.” The two men embraced, kissing each other twice on the cheeks and clasping hands before taking seats. “Now things are easier,” Patriarch Kirill said. Francis responded, “It is clear now that this is the will of God.”

The meeting was richly symbolic: Francis, leader of the world’s 1.2 billion Roman Catholics, stood with Patriarch Kirill, leader of the largest church in the Eastern Orthodox world, with an estimated 150 million followers. But it was also about geopolitics, rivalries among Orthodox leaders and, analysts say, the maneuverings of President Vladimir V. Putin of Russia — who is closely aligned with the conservative Russian church.

For Francis, the meeting was an ecumenical and diplomatic coup that eluded his predecessors but that also opened him to criticism that his embrace of the Russian patriarch would indirectly give a boost to Mr. Putin as he wages a war in Syria and continues to meddle in Ukraine.

The Vatican has published the full text of their joint statement. The pertinent portion:

The family is the natural centre of human life and society. We are concerned about the crisis in the family in many countries. Orthodox and Catholics share the same conception of the family, and are called to witness that it is a path of holiness, testifying to the faithfulness of the spouses in their mutual interaction, to their openness to the procreation and rearing of their children, to solidarity between the generations and to respect for the weakest.

The family is based on marriage, an act of freely given and faithful love between a man and a woman. It is love that seals their union and teaches them to accept one another as a gift. Marriage is a school of love and faithfulness. We regret that other forms of cohabitation have been placed on the same level as this union, while the concept, consecrated in the biblical tradition, of paternity and maternity as the distinct vocation of man and woman in marriage is being banished from the public conscience.