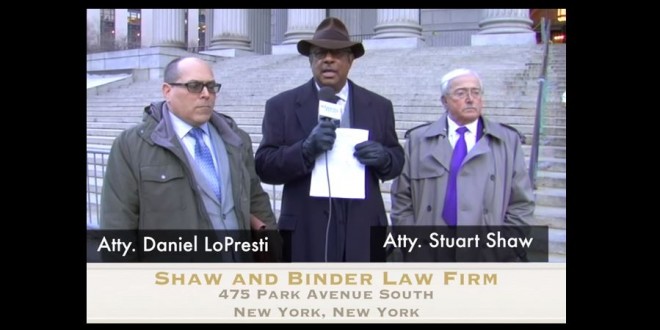 Last night Harlem hate Pastor James David Manning posted a jubilant YouTube clip in which he stands outside a Manhattan courthouse with two attorneys who brandish a temporary restraining order on the foreclosure auction that was scheduled for next week. Such delays are apparently routine in cases like these and the court has scheduled an April 21st hearing on whether the auction should go forward.

But as it turns out, the Ali Forney Center is rather pleased to have the extra time. Tonight AFC founder Carl Siciliano tells us:

“This development gives us more time to research the conditions of the ATLAH building and assemble the most advantageous financial package possible prior to making a bid for the building at auction. While we are excited at the possibility of acquiring the building at auction, we were anxious at needing to rush quickly into this process. The temporary restraining order allows us time to gain more knowledge and strengthen our position.

“Because of the extraordinary success of the Harlem No Hate campaign, AFC will acquire new space to house and support our kids, whether at ATLAH or elsewhere. This represents a great victory for our homeless youth who will find home and safety. It also represents a great victory for our LGBT community, and our allies, who have, in standing up to protect homeless LGBT youths from ATLAH’s messages of hatred and violence, demonstrated that we are a caring, compassionate and generous community. No matter the outcome of the legal hearing, our youth have already won.”

UPDATE: The city is very sure that the foreclosure WILL happen.

The Department of Finance remained confident the sale would take place, albeit with a delay. “The default judgment is not open to interpretation,” city officials said, noting that they will “vigorously argue [our] position” at the April hearing on the matter.

RELATED: Aren’t you very curious about the legal firm that took this case?

ALSO RELATED: Check out this profile on Manning published yesterday by Fusion. He actually has a gay fan.