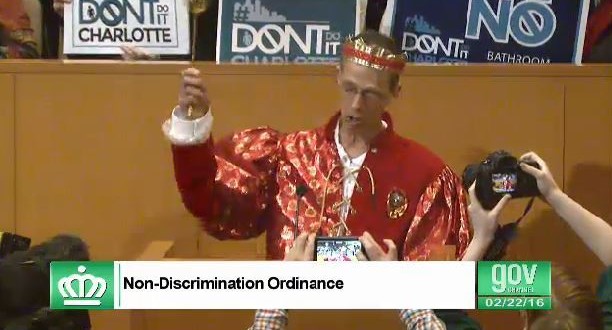 More than 100 people packed a council hearing before the vote. Self-identified Christian conservatives, many furious, expressed fear the nondiscrimination law would allow transgender people — and men posing as trans — to sexually assault women in restrooms. They also worried about their religious freedom, saying the bill would force them to promote LGBT values in violation of their faith.

One man — dressed up as a king and waving a scepter — mocked transgender people by proclaiming, “I identify as gender royal … Anyone who does not bow and call me your highness shall be fined.”

When the man refused to stop yelling, Mayor Jennifer Roberts threatened to have him removed from the room. She also asked anti-transgender speakers to show “human decency.”

Previous STUDY: Seas Rising Faster Than In 2800 Years
Next REPORT: Hitler Had A Micropenis And One Testicle