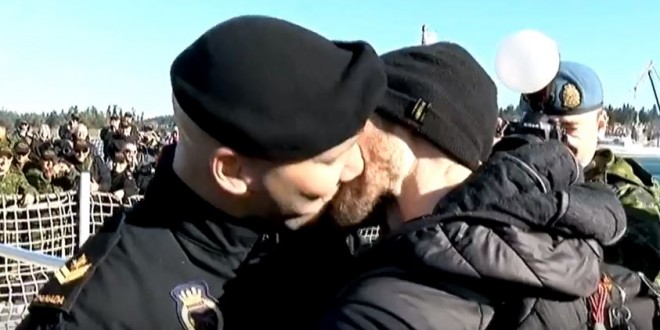 And what a kiss it was! The CBC reports:

The first kiss for a returning sailor after a long deployment at sea is a sweet and memorable tradition. But in what is believed to be a first for the Royal Canadian Navy, that time-honoured ceremonial kiss was between two men.

There were loud cheers today when Master Seaman Francis Legare embraced his partner, Corey Vautour, after more than eight months at sea. “I have been away for 255 days, so it feels great,” a smiling Legare said. “I am speechless.”

HMCS Winnipeg, which has a crew of 250, returned to Victoria on Tuesday after a tour in the Caribbean and eastern Pacific. Being the first sailor off a ship is considered an honour and privilege in the Canadian navy, and it’s decided by a random raffle.

RELATED: The first such ceremonial kiss for the US Navy took place in 2011 shortly after the repeal of DADT.