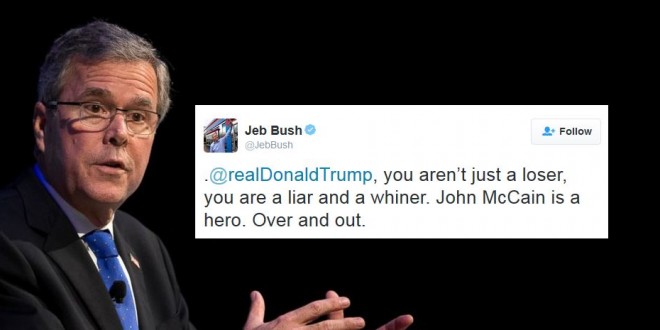 Bush To Trump: I Know You Are But What Am I?

Jeb Bush called Donald Trump a “loser, liar and a whiner” on the eve of a key vote in the race for the Republican nomination. Mr Bush who is lagging in polls behind the billionaire said he would not allow “someone try to hijack a party that I believe will allow people to rise up again”. Mr Trump responded: “Jeb is sad and desperate, he’s a pathetic person. He’s gone absolutely crazy. This guy is a nervous wreck, I’ve never seen anything like it. “Jeb is having some kind of a breakdown. He’s an embarrassment to his family. Frankly, he’s a stiff. He’s not a guy who can be president. He doesn’t have what it takes to be president.”

Previous NEW HAMPSHIRE: Gay Voter Confronts Rubio, Demands “Why Do You Want To Put Me Back In The Closet?
Next American Bar Association Honors Evan Wolfson