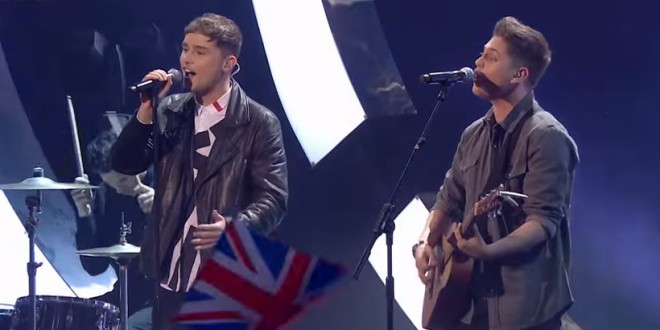 My usual annual slew of Eurovision posts have taken a backseat this year to the presidential race. To catch up a little bit (many other entries are also in the comments), this happened last night in Britain:

Pop duo Joe and Jake have been selected to represent the UK at May’s Eurovision Song Contest in Sweden. The singers, both former contestants on The Voice UK, won a public vote with You’re Not Alone, an uptempo, piano-driven song “about unity and love”.

“It feels amazing,” said Joe Woolford, 21, from Ruthin, Denbighshire. “We’re just so proud.” “It’s going to be incredible. We hope we make you all proud,” added Jake Shakeshaft, 20, from Stoke-on-Trent. The duo will be hoping to avoid the fate of last year’s entrants, Electro Velvet, who came third from last, scoring just five points.

The UK last won the contest in 1997, when Katrina and the Waves topped the leaderboard with the anthemic ballad Love Shine A Light. Frontwoman Katrina Leskanich said she hoped victory could be achieved again in Stockholm. “Everybody said in 1997 that we couldn’t win it because of political votes but it’s an absolute crock. We have everything we need to win it this year.”