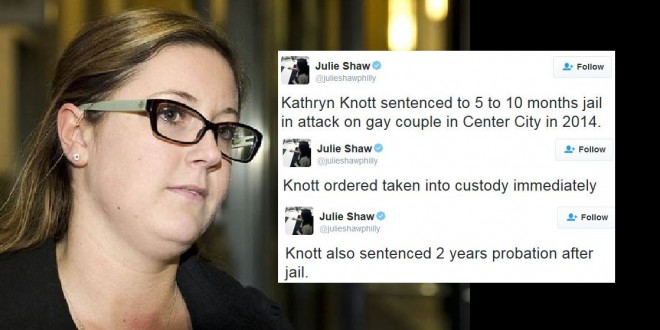 JUSTICE! Philly.com has the news:

A Philadelphia Common Pleas judge on Monday sentenced Kathryn Knott, 25, of Bucks County, to 5-10 months in jail for participating in an attack on a gay couple in Center City in 2014. Knott, of Southampton, wept heavily when Judge Roxanne Covington announced her sentence. Her parents rose to console her.

She was convicted by a Philadelphia jury in December of four misdemeanor counts – simple assault, conspiracy to commit simple assault, and two counts of reckless endangerment. The panel of eight women and four men acquitted her of more serious felony aggravated-assault charges. Knott was taken into custody immediately and ordered to two years probation after her time.

Knott had rejected a plea deal which allowed two of her co-bashers to get off with community service.

Previous Loony Louie Gohmert: The Supreme Court Declared Itself God With Its Same-Sex Marriage Ruling [VIDEO]
Next NOM Whines: The Media Is Biased Against Ted Cruz