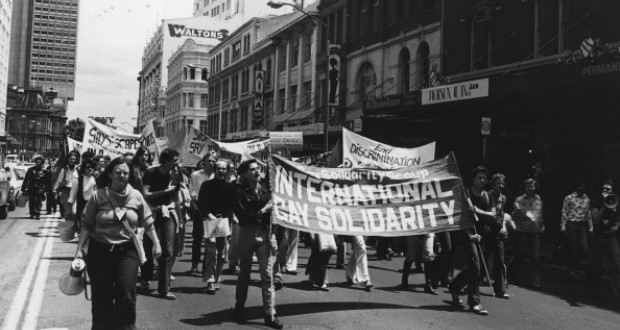 After a wait of nearly 40 years, “78er” Julie McCrossin​ says she was thrilled and emotional to learn that the NSW [New South Wales] government is to apologise for the discrimination and mistreatment that she and other gay rights activists suffered in 1978.

The commentator and broadcaster said she understood that she and a group of 78ers – organisers of Sydney’s first Mardi Gras – will attend Parliament on Thursday, when Coogee MP Bruce Notley-Smith will introduce the motion of apology to the NSW Legislative Assembly.

On June 24, 1978, more than 500 activists took to Taylor Square in Darlinghurst in support and celebration of New York’s Stonewall movement and to call for an end to criminalisation of homosexual acts and discrimination against homosexuals. The peaceful movement ended in violence and public shaming at the hands of the police, government and media.

Remembering the attacks and imprisonment of many activists at the rally, Ms McCrossin said the events around Sydney’s first Mardi Gras were “cruel and inhumane” and left many traumatised.

Today the Sydney Morning Herald also apologized for its role in the incident.

Three days after the melee, Fairfax Media newspapers including the Herald publicly outed 53 people involved in the pro-equality march, publishing their names, addresses and occupations in the newspaper. Subsequent editions published the details of more protesters, including the names of 104 people facing charges resulting from a homosexual rights march the previous weekend in Sydney.

As was common practice at the time, the press routinely published the full details of people who appeared in court, regardless of the nature of the offence with which they had been charged. The public lists saw many protesters further discriminated against, in some instances causing the loss of jobs and homes.

“We acknowledge and apologise for the hurt and suffering that reporting caused. It would never happen today.” He said Fairfax Media has made contact with representatives of the 78ers so that an apology can also be made in person.

Watch the apology for a recounting of the abuses on that night. As you can see from the second clip from last year’s Mardi Gras, the surviving 78ers continue to be honored at Australian pride events.