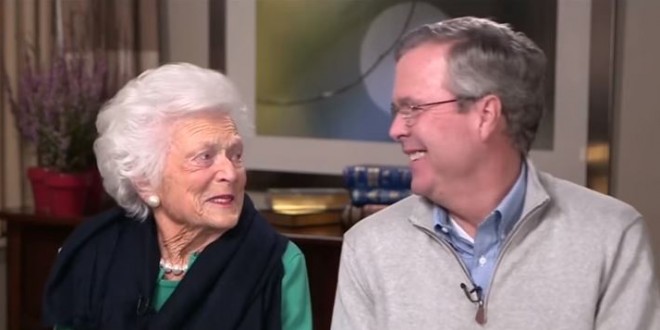 And Now A Message From Mama Bush [VIDEO]

One day after releasing a campaign ad starring his brother, Jeb Bush has issued a 30-second spot in which his mother takes a swipe at Donald Trump. The ad was cut from a CBS interview done yesterday. Politico recaps:

Former first lady Barbara Bush has some advice for Jeb Bush ahead of Saturday’s Republican debate: Man up. “He’s almost too polite. I don’t advise him, but if I gave him advice I would say, ‘Why don’t you interrupt like other people do?’” Barbara Bush said in a joint interview with her son that aired Friday on “CBS This Morning.”

She was referring to her son’s performance in the Republican debates. “I’ve gotten better at interrupting, Mom,” Jeb Bush said. “Come on.”

“He’s so polite. We brought him up that way, and he does not brag like some people we know,” Barbara Bush continued, likely alluding to Donald Trump. Asked who she was talking about, she said, “I can’t remember.”