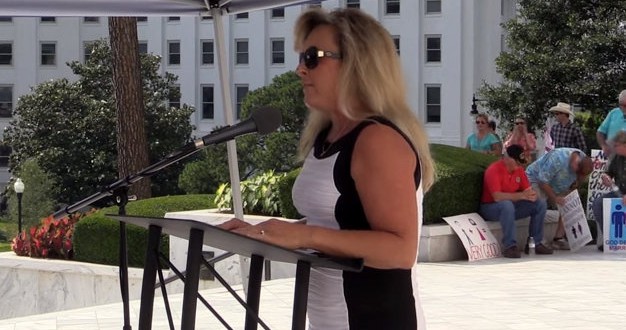 “Very rarely do I get involved in other political races,” Moore said. “However, our nation is at a crossroads. If we do not choose wisely, we may forever lose our country. Many will say anything to get elected, but we must look at what the candidates have done. In studying and watching those running in this race – one stands for the same values I believe in. One is a true defender of the Constitution. The next president will make many critical appointments and tough decisions with regard to the rule of law, the Supreme Court, and national security. Ted has been a consistent Constitutionalist and a faithful defender of life, marriage, and small government.”

“Kayla is a veteran of the struggle for religious liberty,” said Cruz. “As the wife of Chief Justice Roy Moore, Kayla played a key role during Alabama’s battle with the ACLU over the right to publicly acknowledge God. She knows that law does not grant rights: it simply protects the unalienable human rights given to each of us by God. I am honored to have her support.”

Moore’s “struggle for religious liberty” includes filing many anti-LGBT amicus briefs and defending a vicious Alabama woman who sought to keep the proceeds from a wrongful death suit from going to the husband of her late son.

The Foundation For Moral Law openly advocates for replacing the United States government with a Christian theocracy based on “biblical law.” From their website:

We believe in one God—the Father, the Son and the Holy Spirit, and the truth of the Holy Scriptures, the infallible Word of God.

We believe that Jesus Christ, the Son of God, died on the cross and rose again to life so that all who believe in Him, by faith, will be forgiven of their sins, and gain eternal life in Heaven. That He ascended to the Father and will come again to judge the living and the dead.

We believe that the United States of America was founded on the laws of Nature and Nature’s God, and that Almighty God is sovereign over the affairs of men, exercising jurisdiction over the family, church, state, and each individual. We believe that God is the Creator and Author of life, liberty, and the pursuit of happiness.