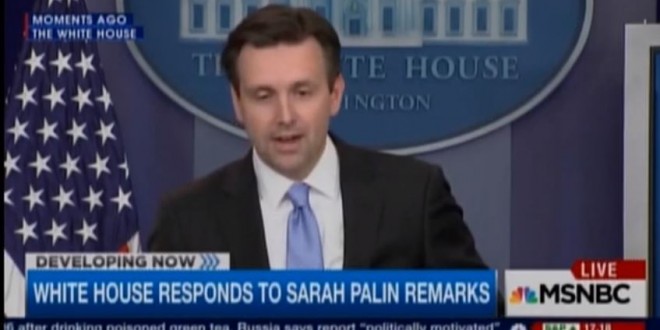 White House Press Secretary Josh Earnest this afternoon addressed Sarah Palin’s claim that her son has PTSD because Obama doesn’t respect the military. Via The Hill:

“I don’t know if the president saw the remarks. I can tell you that the reaction of some people is to make light of the rhetoric that we see on the campaign trail, particularly from Gov. Palin, but the fact is domestic violence is not a joke,” press secretary Josh Earnest said Thursday at the White House briefing.

Pressed on whether Palin was making a joke of a serious issue, Earnest declined to go after Palin directly. “No, I’m just saying that the instinct that some people have when hearing her rhetoric is to make light of it,” he said.

“And sometimes those jokes come pretty easy. But in this case, the issues she’s talking about are quite serious and certainly issues that we take quite seriously here.”

At a rally following her endorsement of Republican presidential front-runner Donald Trump, Palin linked her son’s recent arrest to the president’s treatment of combat veterans.

This morning Trump said that he urged Palin to bring up the issue publicly.