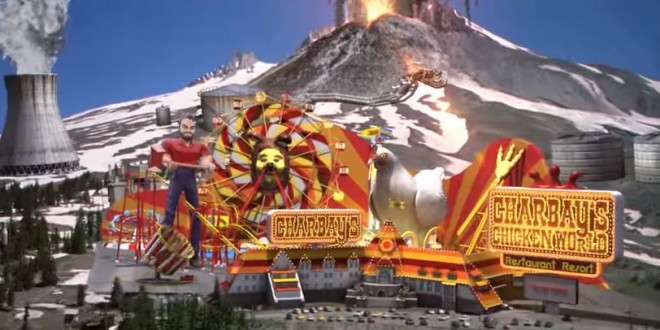 I can’t even begin to describe this strangeness. Maybe the AV Club can help:

Upon looking at The Chickening, other filmmakers wept, for there were no more worlds to conquer. That’s a bit of hyperbole, but the short film does seemingly represent the culmination of remix culture in film. Directed by Nick DenBoer and Davy Force, The Chickening has toured film festivals for a while—playing TIFF, Fantastic Fest, and most recently at Sundance—and has finally landed online. It is an augmented reality version of Stanley Kubrick’s The Shining, but with chickens, interdimensional aliens, and a 42-year-old manchild at the heart of it all. It manages to be an absurd, barely cohesive story of one family’s descent into poultry-themed madness, while still showing love and reverence for Kubrick’s horror masterpiece.