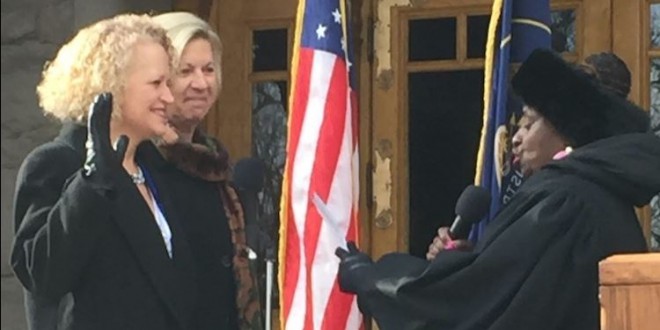 UTAH: Openly Lesbian Salt Lake City Mayor Jackie Biskupski Sworn In With Fiance At Her Side

Jackie Biskupski has been sworn in as Salt Lake City’s mayor, becoming the first openly gay person to hold the office. The 49-year-old former Utah lawmaker said Monday she is humbled by her history-making election but said more needs to be done for LGBT rights. Biskupski is no stranger to making history in the state. In 1998, she became Utah’s first openly gay lawmaker. She served in the state House until 2011. Since then, she has worked in the Salt Lake County Sheriff’s Office. Biskupski defeated two-term incumbent mayor Ralph Becker in November by winning 52 percent of the vote in the state’s liberal capital city.

Previous NORWAY: Government Pressured To Ban Tobacco Sales
Next Trump Taunts NFL Team Owner Over Loss: If You’d Supported Me Your Team Would Be In The Playoffs