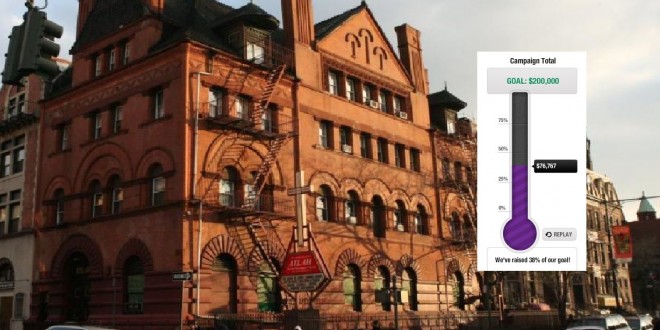 AMAZING! On Thursday we learned that Harlem’s infamous “Jesus Would Stone Homos” hate church will be placed to public auction on February 24th due to over $1M in unpaid debts. Late Friday afternoon the Ali Forney Center, which serves homeless LGBT youths, announced a campaign to buy the building and the donation drive has already rocketed above $75,000. AFC founder Carl Siciliano tells us that a huge chunk of the donations have come from the JMG community. Let’s keep that thermometer rising!

From the campaign page:

AFC, whose Harlem based programs provide 50,000 meals a year for homeless LGBT youth and offers interventions such as medical and mental health care, case management, educational and career services, plant to utilize the Atlah site to provide housing to LGBT youths. AFC also plans to launch a catering business run and operated by its clients.

AFC hopes to raise at least $200K through an initial public fundraising effort, and will seek to leverage those funds to obtain additional support from local government, major donors and foundations. If the Ali Forney Center is not able to obtain the building, it commits to utilize any funds raised to increase its housing and vocational services for homeless LGBT youth in another site.

It’s hoped that we’ll see another big spike in donations tomorrow as people return to their offices and share the campaign with co-workers. AFC is also pushing to get the campaign into the national press. That ATLAH has been classified a hate group by the SPLC should help.

IMPORTANT: “Donations can also be made through Paypal. To do so, enter [email protected] as the payee address. Enter “Harlem No Hate” under instructions so that we may track donations on this page. “

RELATED: Yesterday ATLAH Pastor James David Manning wailed on Twitter that “sodomites are trying to silence me!” YES. Let’s do that.