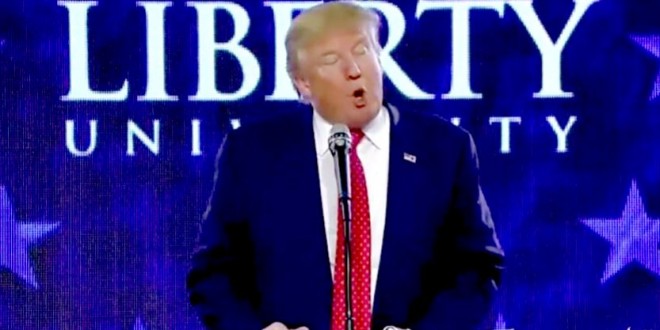 Seriously. This is a thing and it’s happening right now. On Martin Luther King Day. Watch below. Roanoke.com reports:

Thousands of Liberty University students braving temperatures of 18 degrees filed in to the Vines Center on Monday morning on the first day of classes, wrapping around and through neighboring Demoss Hall. They assembled early for the long-awaited convocation appearance of controversial GOP presidential primary frontrunner Donald Trump. The university canceled classes scheduled prior to the 10:30 a.m. convocation, according to LU President Jerry Falwell Jr.

The cancellation is to help the U.S. Secret Service with security protocols, he said on social media. The school took the same measure when candidate Ben Carson spoke at convocation in the fall. Today is the first day of classes for the spring semester at Liberty University. Falwell has said the school is putting measures in place to decrease wait time to get into the Vines Center, as compared to Carson’s visit.

Trump’s visit comes just two weeks before the Feb. 1 Iowa caucus that kicks off the presidential primary season. The visit also comes on Martin Luther King Jr. Day. The timing was purposeful, Falwell has said. “We chose that day so that Mr. Trump would have the opportunity to recognize and honor Dr. King on MLK day,” he said in an earlier interview, adding it’s part of Trump’s plan for the speech.