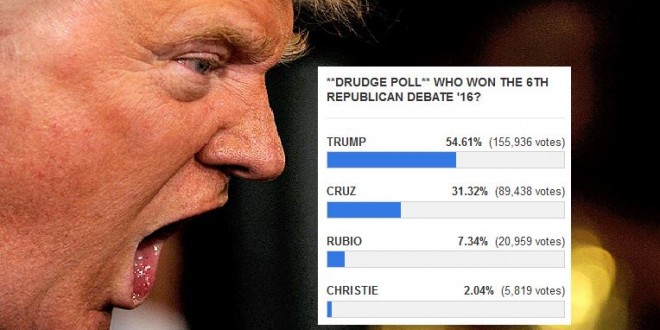 Things got deliciously ugly between Donald Trump and Ted Cruz at last night’s sixth GOP debate. While many on the right believe Cruz came out on top, Trump still won the Drudge Report readers poll and by a larger margin than last time. From the New York Times:

The sixth Republican presidential debate was notable for sharp exchanges between Donald J. Trump and Senator Ted Cruz of Texas, a heated argument about immigration and taxes between Mr. Cruz and Senator Marco Rubio of Florida, and sustained fire from everyone in the field directed at Hillary Clinton.

Commentators from across the web were impressed with Mr. Cruz’s quick wits, and they said that Mr. Trump seemed to regain his footing after being rattled when the Texas senator brought Mr. Trump’s Scottish mother into an argument over his eligibility to be president. For the rest of the candidates, the challenge was breaking through on a loud and crowded stage.