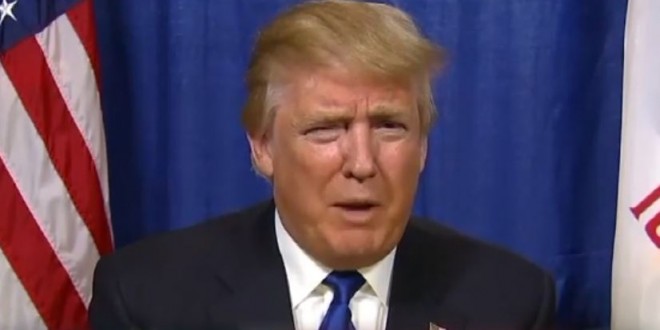 Donald Trump this morning appeared on Fox News Sunday where he said he’d “strongly consider” making Supreme Court appointments that could lead to the reversal of Obergefell. Politico reports:

“It has been ruled upon. It has been there. If I’m elected I would be very strong in putting certain judges on the bench that maybe could change thing, but they have a long way to go,” he said on “Fox News Sunday.” “I disagree with the court in that it should have been a states’ rights issue.” Trump has been appealing to conservative voters in Iowa during the last week and has increased his push to get voters to the caucuses on Monday night after a Des Moines Register/Bloomberg Politics poll showed him leading the race by 5 percengate points.

The above-cited bit comes at 8:15 in the below clip. As you’ll see, Trump stopped well short of denouncing same-sex marriage itself, unlike the rest of his leading opponents.