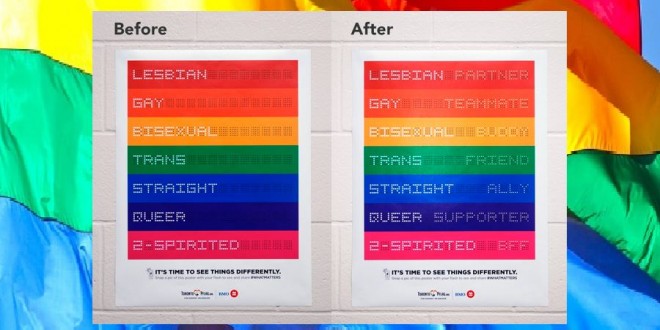 New posters have gone up in Toronto District School Board schools, which include 76,000 middle school and high school students. Launched by LGBTQ advocacy group Toronto Pflag, the posters depict a rainbow that spells out the LGBTQ acronym: Lesbian, Gay, Bisexual, Trans, Straight, Queer and 2-Spirited. When students use the flash on their camera phones to take a picture of the poster, the words are suddenly accompanied by nouns that illustrate LGBTQ folks are people they know, respect and love: partner, teammate, buddy, friend, ally, supporter, and BFF.

“We wanted to send a positive message to students that we are all more than just our gender identity and sexual orientation,” says Toronto Pflag president Anne Creighton. “Our mission is to get students talking about these things, so the novel and shareable nature of this poster was a perfect fit for our message.” The poster was designed by J. Walter Thompson Canada, which developed a special printing technique especially for the campaign.

“By taking a traditional medium like print and adding an interactive component that’s triggered by students’ phones, our message has a greater likelihood of being shared,” says executive creative director Ryan Spelliscy. “School hallways are a busy place, so trying to compete with everything else on the walls is a challenge.”